Starting off the new year with a new 3D model. One that I've been wanting to do and have been collecting reference material for a while: The Orbital Office Complex as first seen in Star Trek: The Motion Picture and had been redressed a number of times over the decades as Space Station Regula One in The Wrath of Khan and later as various Federation starbases in Deep Space Nine and Voyager. 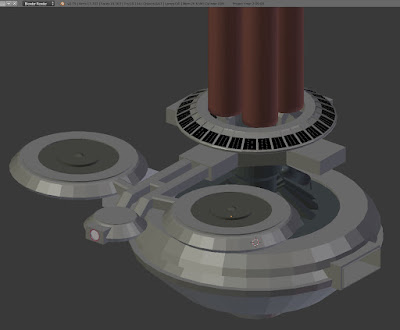 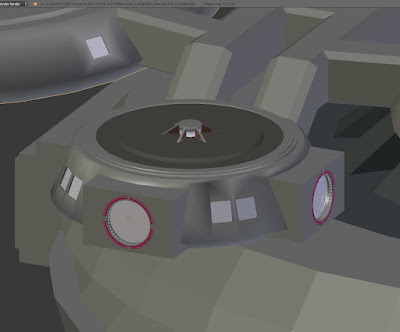 The interior I had actually modeled years ago as part of the Drydock module since one of the exterior structures bore a striking resemblance to the docking port module. While the basic shape, airlocks, transporter, and reception desk was done, more details like the computer room on the left of the image is new. Though again that model was already created for the Enterprise's transporter corridor and sickbay area.

Posted by Arthur Nishimoto at 9:27 PM No comments:

Most of the recent Spacedock updates was in preparation for multiple Halloween 2021 photoshoots. This included creating a Spacedock office as seen in Star Trek: Lower Decks and updating the interior of Spacedock: center dock window details, wall windows/details, and floor details. 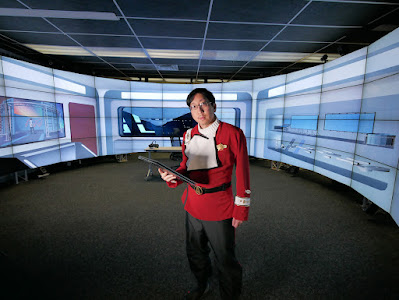 As a bit of a tribute to CAVE2 itself, the original concept image is framed on the left. On the top shelf is sort of the lineage of my work at the Electronic Visualization Laboratory (EVL) with a model for each of the major hardware systems I worked on.
From left to right (top shelf): TacTile, OmegaDesk, CyberCommons, CyberCommons Touch Wall, and CAVE2.
On the bottom shelf is a spaceship lineage of the 3D models I've made over the years.
From left to right (bottom shelf): Saturn V, Space Shuttle, International Space Station, TOS Constitution, Refit Constitution, Excelsior.
As EVL's weekly Zoom meeting was just before Halloween 2021, I had intended to use CAVE2 as a real-time Zoom background for the meeting. Due to the brightness of LCD displays I had to lower the brightness of the entire scene so it wouldn't be overexposed on Zoom.
The meeting was cancelled, but I did record a test video. The idea was I would play the docking animation while I was giving my update on Zoom.

Posted by Arthur Nishimoto at 11:01 PM No comments:

Finally going through and updating this blog with various archived progress from 2021. Updates were primarily focused on Spacedock. 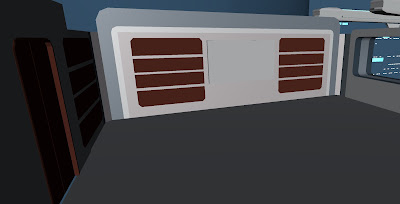 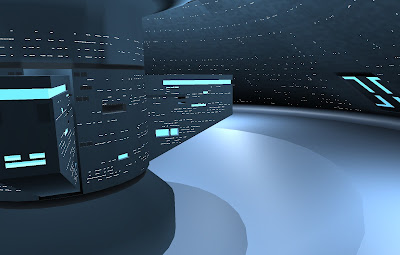 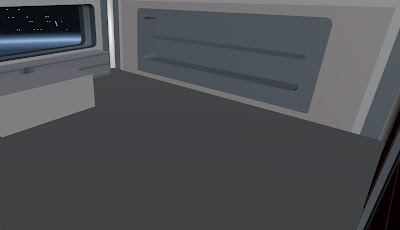 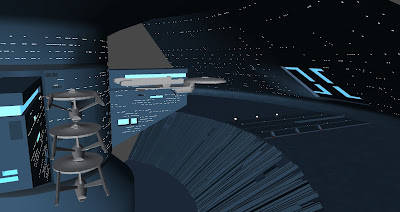 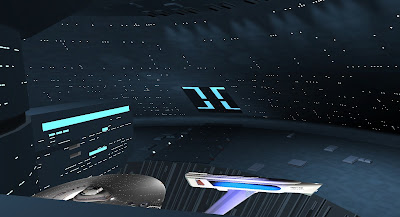 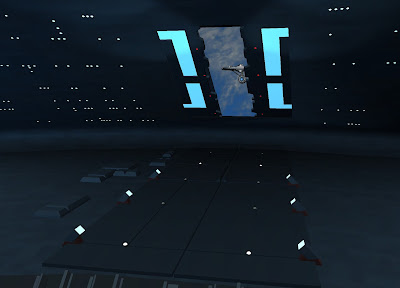 Posted by Arthur Nishimoto at 10:45 PM No comments:

Updated the Spacedock exterior window details on the lower section. Fairly sure I already did this, but lost the updated file. Probably with all the file shuffling over a hectic 2020. 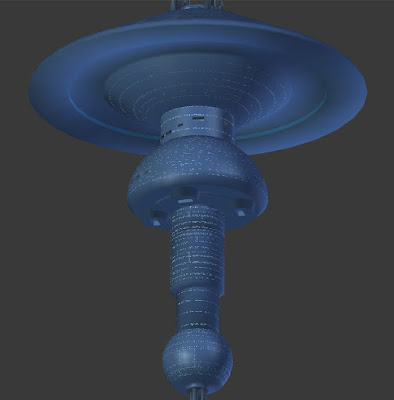 Note: Published on Jan. 2022 as I finally go through my archive.

Posted by Arthur Nishimoto at 10:35 PM No comments:

Just a quick update to add some CAVE2™ pictures of my Star Trek: The Motion Picture anniversary updates.

Posted by Arthur Nishimoto at 7:17 PM No comments:

Just my way of celebrating the 40th anniversary of Star Trek: The Motion Picture. Often underrated as a Star Trek film, it has plenty of flaws but there are so many iconic elements that this film introduced such as the refit Enterprise - which I argue still remains as the iconic USS Enterprise in the general public and Jerry Goldsmith's 'The Enterprise' and 'Klingon Battle' themes.

Still hoping for a  40th anniversary release of the 2001 director's cut in 4K which I consider the definitive version of the film. While it had a DVD release, it was never released on Blu-ray since the new digital effects were rendered too low resolution to be decently up scaled and the server containing all the art assets was never backed up, sold, and apparently the files lost. Sadly this is also the case for Star Trek: Deep Space Nine with a few exceptions - notably some of the artists who worked on the show who have backups of their work.

Given I wrote and presented my PhD thesis proposal on December 2, I mostly rushed to get as much of this done by the 6th - ideally ending with some new CAVE2 footage. While some tests were made, a more polished video tribute was just not feasible.

Main efforts went to adding the recreation desk introduced (and only seen) in Star Trek: The Motion Picture. Ironically similar to the above story, I had started this room a few years back and lost the file before it was finished. 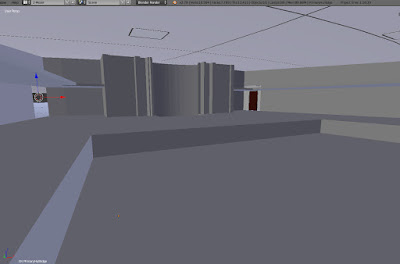 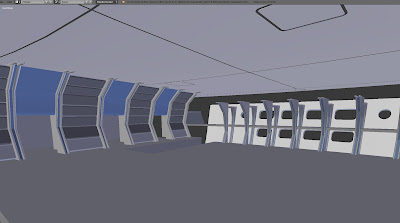 Similar to the torpedo bay, this room as shown in the film can't actually fit in the exterior model of the Enterprise. As seen in the screenshots above the curved walls are about half the height they're supposed to be, but I'm already hitting the top of the primary hull, with the floor about as low as I can without going through the bottom of the hull. 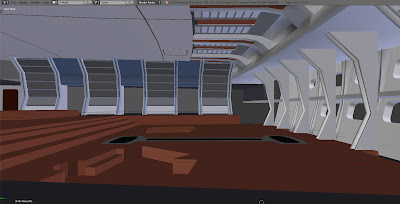 Working on making a scaled, but representative version of this room was a bit challenging. In particular how high the balcony should be. Only after a quick viewing in CAVE2 did I realize I needed to make the top balcony taller. 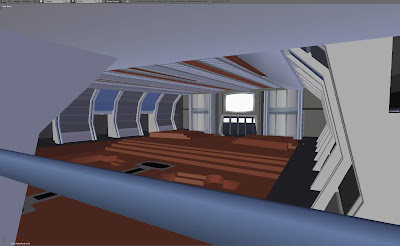 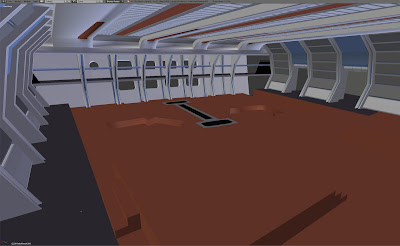 After nearly 8 hours of modeling over 3 days, I managed to get a decent amount of the main wall details done on the 40th anniversary of the film: turbolift alcoves, main display, and the Enterprise legacy display.

Posted by Arthur Nishimoto at 12:03 AM No comments:

Email ThisBlogThis!Share to TwitterShare to FacebookShare to Pinterest
Labels: Enterprise

In preparation for the 40th anniversary of Star Trek's debut on the big screen, I've made plans to extend parts of my Enterprise model based on scenes that appeared in Star Trek: The Motion Picture.

I'm targeting the original theatrical release date (December 6) but with the limited screening of the film in theaters on September 15, I've started with a relatively quick modification of the main bridge.

Reverting the bridge, which I originally designed based on Wrath of Khan, consisted of a brighter and more beige color scheme for the walls, floors, and display panels. More notably several stations (Science, Engineering, Security, and Environmental Control) were moved around and the wall frames around several displays (most notable on the four left stations in the image above) are connected across the bridge stations.

I left a few of the WoK era display screens up and recolored a few as necessary instead of using some of the simpler more generic displays that were used in TMP.

After the basic recolor, I started to completely re-model the bridge chairs as seen in The Motion Picture.

The original chairs I modeled in 2011.
Posted by Arthur Nishimoto at 12:38 AM No comments: